How to Make the Enemy Run!

The late Pastor E. V. Hill tells us How to Make the Enemy Run!

This is a good word!

Posted by Editor at 2:33 AM No comments:

You Can Still Win!

I found this old clip of an Edwin Hawkins Gospel Hit called If at First You Don't Succeed. This song conveys that there is life after failure. Many of history's greatest became so because they all developed the ability to bounce back from failure. Many of these individuals can point to 1 failure or another in their lives that became their turning points to the road called success. How many of us have the resolve to dust ourselves off, and pick up the pieces? How many of us are willing to try one more time? How many times have we let a failure, or a disappointment keep us from the Halls of Success?

I heard Bishop Jakes say something today that set off a light bulb in my head. He said we are living in strange times where an formerly middle class family will drive their Audi to the Homeless Shelter because they have just lost their home. This is a post for encouragement sakes only. Please keep your melancholy rants to yourself, and let's use this post to encourage someone who might be going through some of the worst days of their lives. There is light at the end of the tunnel. Keep going fellow Warriors You Can Still Win! 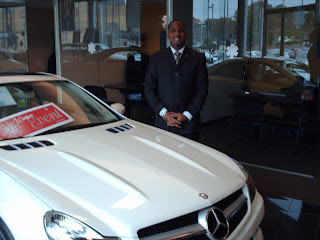 Minister Desmond Hunt is an Armor Bearer for Superintendent Jerry Taylor who pastors the Holy City Church of God in Christ in Memphis, Tennessee. Minister Hunt is a top salesman for Mercedes Benz of Memphis. It is totally amazing that members of The Grand Ole Church of God in Christ now span nearly every occupational field that there is. Minister Hunt deals with the upper echelon of society on a daily basis, yet he has maintained the attitude of a humble servant. God has richly rewarded the service of this young man, and we feel that this young man’s intelligence, wit, and humble attitude will take him far not only in the business world, but also in the Church of God in Christ, Inc.!

Mercedes Benz of Memphis
Posted by Editor at 5:02 PM No comments:

Posted by Editor at 7:30 PM No comments: